Today our jewish friends celebrate Hanukkah,  and a lot of my friends in the U and the S and the A celebrate Thanksgiving.
In France we celebrate … thursday.
To celebrate a thursday is not really the big deal, so I thought I better will celebrate  a THANKSGIVUKKAH with you.
For Thanksgivukkah  I thought I will cook a crossover-menu, that means my staff gets jewish food and I’m content with the common turkey thingy.
Traditional for Hanukkah are Latkes. We love Latkes, you can make them in  many variations and sizes , here is a site with 87 recipes. Or more.  I will use a recipe for one big latka of an old jewish Lady named Babette. She lived in the small Kraal  where my mom grew up and when she made Matzah balls or Latkes my mom was the first who occupied Babette’s table. Today we add smoked salmon to our Latkes and a dressing what Mr. Heinz made for us.
You need:
5-6 potatoes, 1 onion, potato flour, 2 eggs, pepper, salt and persil

rasp the potatoes and the onion and squeeze it as best as u can (we used a common sieve, but you can do it with a dish towel too. butt that’s a  mess) 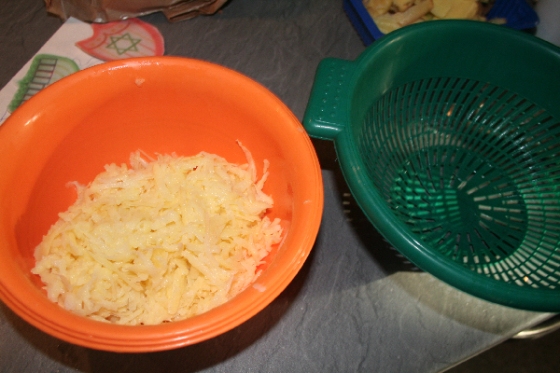 then throw the eggs in the bowl with the squeezed potato-onion mix. now add some potato flour ( that’s more a matter of judgement)  mix it till it is a smooth gravy, add pepper, salt and persil and put it in a buttered pan. Press it on with a fork till it is flat. Use a moderate heat and let it roast. TRICK: add a package of  instant onion soup, so you have the onions and all spices you need.

Now you have time to prepare the turkey menu:
you need: turkey breasts, 2 carrots, 1 potato, a little bit  milk
cook the turkey breasts together with a peeled potato and the carrots  till they are done.
mash the potato ( have you ever made potato mash from ONE potato? No? Me neither!) and add  the milk. Now fill this pulp into a doily and make  some piles on a plate. Cut the turkey breast in slices, add the carrots and let it cool down a while.

Now it is time to turn your latka. You can do this with laying a plate on your pan or if you are from Barnum&Bailey you can throw it in the air and catch it with the pan – good luck!

While the other side of your latka roasts you can make some Hanukkah cookies and the most important thing: Hanukkah gelt. You can buy the cookies and the gelt too, butt pawmade is pawmade and that’s always better or at least different.

I used a common short pastry and cut out  a Menora, a Dreidel, a cup  and a star. For the gelt I used a shot glass and made some circles. The cookies should be placed on a baking plate with baking parchment and they need some minutes in a preheated oven. Some minutes means 10 to 15,  not more, or your cookies will look like mine. Now you can decorate them with icing or the decorating pens you can buy in stores (to use an edding is not a good idea). Our cookies look pitiful und I have some doubts that my Hanukkah-gelt will be article eight currency ,  but it’s the thought what counts, right?

Your Latka should be nearly done now and you can place the smoked salmon on a plate. Now part the Latka in two (nearly) similiar parts and place it on your plate.

Don’t forget to give the turkey menu to the Weimaraner. Now park your butt on the chair and: DIG IN!

BTW: Babette once said who uses a knife to cut the Latkes is not worth them. They only should be dissected with your fork.

Chag Hanukkah Sameach! Happy Thanksgiving!  Have a wonderful Thursday
and enjoy the fabulous video, the mom of Henry, Archie and Oscar made: