.
MAGIC MOONDAY
.
FIRST SOMETHING WHATS NEAR AND DEAR TO MY HEART:
.

<— sorry it’s blurry and 3:30 AM
.
The moon is always important in magic and superstition. He has an influence of all life on slice earth and he is the master of the tides and all liquid stuff – except of rain – that’s always the fault of the weather-guy.
. 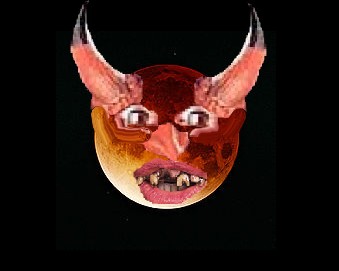 .
If you want to find a trashure you should search only in nights with a full moon. The reason is simple and not really magic: you will see where you are going.
.
When you pick apples by night in the moonlight they will be fresh for all eternity or till you eat them.
.
To watch the NEW moon over your left shoulder brings bad luck – to watch him over the right shoulder brings good luck.
.
If you have a full moon two times in one month is a sign that you will get a lot of mice in your crib. That should not really be a problem for those who share their crib with a kitty, huh?
.
Also the moon has a big influence on our condition and feelings  and appropriate to his phases he can be helpful or not.
.
THE NEW MOON
.

.
Mostly we take no notice of the new moon, because  he is most invisible. The reason is, that he stands between sun and slice earth and we can’t see him. The invisible new moon time is only for one night and if you plan to change something what should have reliability – the time of the new moon is the best time for a start.
.
FIRST QUARTER MOON
.

.
That’s the time when the moon is wandering in east direction after the new moon. He is visible as a fine crescent on the sky. This time is best for healing and recovery and we are physical and mental full of energy.
.
THE LAST QUARTER MOON
.

.
Is the time for relaxing and release – and best to quit bad habits, because the body has not much needs or claims.
.
THE FULL MOON
.

.
The moon is towards to the sun and we can see him as a cheese wheel. We all are mostly over the top, we can’t sleep and we aren’t able pull the hand brake. We can’t get enough and even here is the root of all trouble: our body storages all popsicles, chocolate bars and every food-sin. It’s also the time for the werewolf. The Werewolf, or in french LE LOUP-GAROU (that sounds more scary, I think) is a legend about people who will transform into a monster on full moon. But that’s just a legend, originated in medieval as the people knew not much about disease agents. Probably the people who became a “Loup Garou” were infected with rabies, that implies the incubations period and the danger of infecting other people.
.
SPECIAL MOONS
.
BLACK MOON
.

.
Or known as “Lilith” is a black shadow over the moon. The time of the black moon is an important sign in many cultures for bad things, destruction and trouble. In old times all dogtors refused to do a surgery, because the chances of recovery were not good and at this time the blood flow is increased. By now many people believe this and when they can plan a medical intervention they avoid the time of the black moon.
.
STRAWBERRY MOON or ROSE MOON
.

.
Most a phenomenon in summer, when the moon has a red or pink halo. Superstition says that this kind of moon will fill the bug houses and its the time for crime. But the reason for this phenomenon is easy: that’s just the dirt of the atmosphere of slice earth in addition with the reflection of the sunlight.
.
BAD MOON
.
.
Is a phenomenon originated in Berkeley/CA, the hometown of the founders of CCR but the influence of this thingy ran around the world. You can recognize the time of the bad moon on a fabulous unique intro and when you hear it, you should run like the wind – otherwise it will stuck in your head till the whole eternity. Your legs will begin to thrash around and you will start to bang with your head. We always have this bad moon  on our playlist when we are on the way to an authority or the bank. If you have sand enough, you can try it with a click on the video.
.
BACARDI MOON OR BOOZE MOON
. 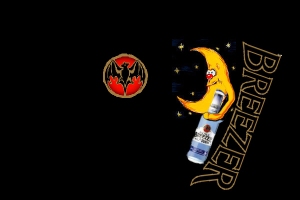 .
A fad of the late 80s or early 90s evoked by too much of Bacardi Breezer – the stuff from hell who gives you headaches that you think your whole dome is a bee hive. When you had more Breezer in your veins than blood you are able to see the DEVIL himself coming out of one of your shoes. The eye wit will swear every oath that he have seen this. Therefore an important hint of MERBEAR: don’t wear your shoes without socks, you never know what’s inside.
.
MOONWALK
.

.
A special type of locomotion, founded by the King of Pop in the 80s. The trick to do the moon walk is, that your soles have always contact with the floor – not to confound with the COW WALK provoked by the UGG-liest boots of slice earth named UGGS.
.
MOONING
.

.
More a thingy what came from the fashion-mafia, but it appears in phases like the moon. You can see quarter- or half moons on humans evoked by wearing outsized pants for the boys or by low low low rise pants on the girls. Sometimes it’s an eyecatcher and sometimes is more a phenomenon for “turn the light out and close your eyes”. The full-mooning is common on radar traps but totally useless, because the moon is always on the pillion or on the back seat. It would make sense when the driver would be the moon, sadly that’s not possible, because even a butt head has no eyes…
.
BLUE MOON
. 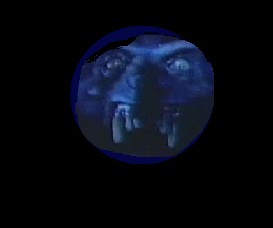 .
Common for the second full moon in one month but also known as a song of Richard Rodgers – the original version is from 1934. The Blue Moon was covered by many wellknown stars – even from Dad’s rival Rod. In the 80s it was THE SONG, performed by THE MARCELS, of the movie “American Werewolf in London” which was iconic  (maybe because of the scenes in a Porn Movie Theatre on Picadilly). The success of the movie catapulted the song back into the charts ( in europe performed by SHOWADDYWADDY) and he became a revival on a time were “Rock n’ Roll” was officially dead and the synthesizers ruled the world…
“ba-ba-bom-bom-a-bomp,
b-dang-a-dang-dang, b-ding-a-dong-ding…… BLUUUUUE MOOOOOON….
.
.
HAVE A MAGIC MOONDAY ALL